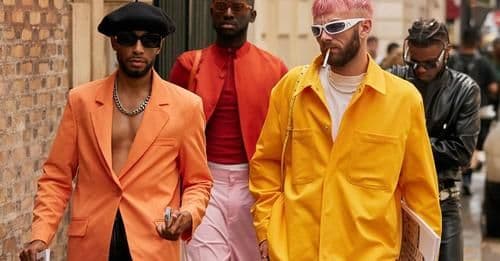 In recent years we have seen a massive growth in the market for Mens Pearl Necklaces. The trend started with Rap artists such as A$AP Rocky and has been steadily building as an increasing number of music and film stars have adopted Pearl Jewellery and made Pearls for Men an increasingly main steam fashion accessory.

The initial Rap and Hip Hop Pearl Necklaces often featured a crystal encrusted cross hanging from the pearl string, it's relatively simple to add a crystal cross to a conventional pearl string. More recent iterations of the Hip Hop Male Necklaces have featured a string which is half Pearls and half Silver Beads.

An indication of just how mainstream the Pearls for Men trend has become came this summer with Rod Stewart appearing in holiday shots with his family wearing a Pearl Necklace!

Actor Timothee Chalamet recently became the first man to feature on the cover of UK Vogue, and of course he was wearing a Pearl Choker!

So this Christmas as you are shopping for gifts a Mens Pearl Necklace or Pearl Choker makes a fashionable choice. We are happy to help with guidance and suggestions. Our current stock of Mens Pearl Necklaces are available in 18" or 20" and have easy to open magnetic clasps, but of course in a gender fluid world the reality is that any of our Pearl Necklaces can be worn by men. As a rule of thumb we would suggest adding 1" to your shirt collar size if you are seeking a Timothee Chalamet Pearl Choker style fit and 2" or more if you are seeking a more conventional necklace fit. If you are feeling more adventurous and you want to recreate Harry Styles Baroque Pearl Earring look then we also have the items you are seeking. Call us on 0333 090 1686 and we will be happy to help.